FAKE FAMOUS or the desire to be Instagram famous at all costs! 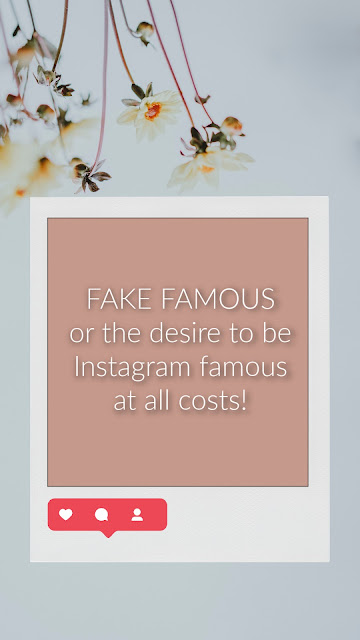 Please do not send any hate to the mentioned Instagram accounts. The views, thoughts, and opinions expressed in the text belong solely to the author, please build your own opinion upon reading. Any content provided is not intended to malign any company, individual or anyone or anything but to show how ridiculous the situation on Instagram has gotten.
I am on Instagram since 2013 and I have seen how it changed from a harmless and fun environment (we were posting all kinds of blurry photos from our daily life- nobody was overthinking it or worrying about how many likes we got- it was also super easy to gain followers because you would follow everybody back!) to a super polished platform where every photo of their feed should look a certain way, to now: a platform full of Influencers and ads (with Reels and video content in the forefront and not so much a polished grid anymore).
I wonder: are there more Influencers today on Instagram than real people? I feel like every 2nd person is an Influencer (or trying to be one). It feels NOT authentic anymore- it is these days only about pushing products to the consumer… and I am guilty myself of doing this! How did I get into this? How do I stop getting PR packages? I am honestly not able to use all these products- and I am only a “Micro Influencer”.
While in the beginning of 2013 nobody would make money on Instagram and the term „Influencer“ did not even exist- today it seems like everybody and your grandmother is an Influencer. Influencer! I do not like this term at all! It means pushing products onto people and basically making ads for companies! Either for just the free product or even for money.
Let me show you an example of a woman - who is imo clearly buying followers, likes and comments - in such large amounts- I am quite frankly embarrassed for her. Why does she feel the need to do that? And what aggravates me even more is: she is constantly working on sponsorships that pay her thousands of dollars for a single post (with her number of followers anywhere from $1000 to $5000)- all the while she is a total Faker! She has no Influence whatsoever and I just cannot believe how many followers she has bought herself.
I also feel sad! So sad for her that she feels she needs to do this in her life to feel accomplished. It just shows how sick our world is and how – especially -Instagram is creating monsters. Plus, she is over 50- that did not stop her from doing this! Older and wiser? Not so much anymore!
See below statistics from Socialblade: the red numbers are followers that she is losing. Losing that many followers per day can only mean one thing: these are spam accounts that Instagram is deleting and because she bought these followers and then she is losing them! Now the green numbers on the other hand are followers she is gaining. Sorry, but no: she is definitely not gaining thousands of followers (on September 24 over 10,000!!!) organically. BS! She is buying them! 😡
From July to September she lost over 7000 followers because Instagram deleted these spam accounts. But she is filling her follower number up again and gained (despite losing thousands of followers) over 19,000 in the last month. 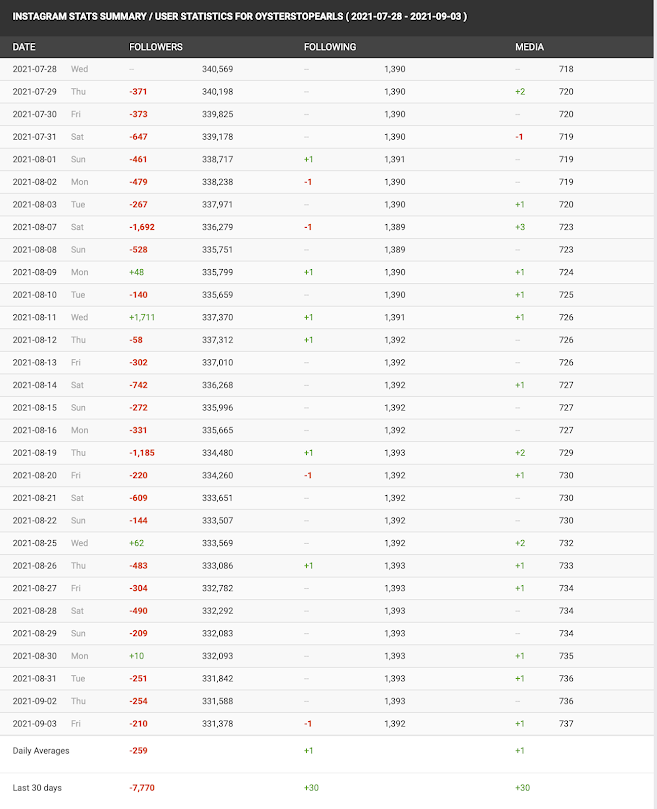 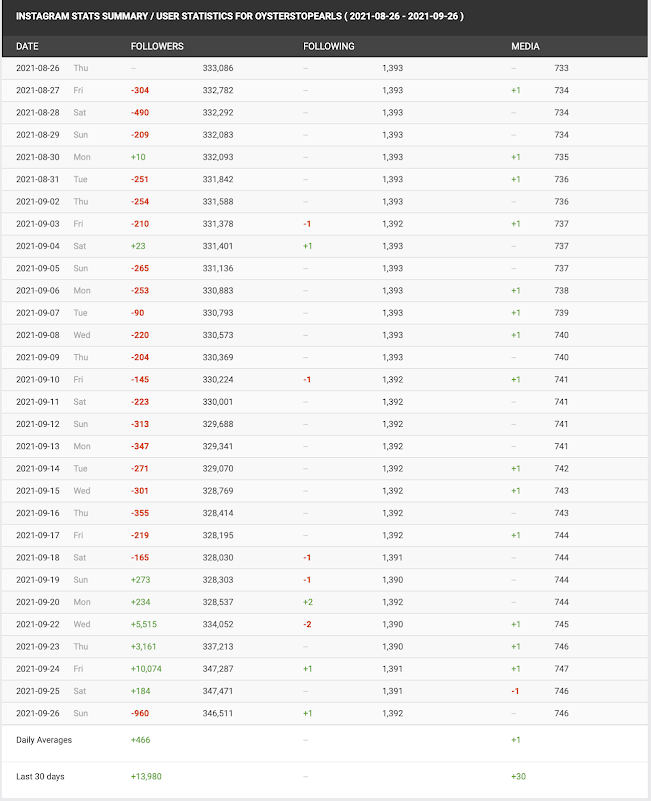 Everybody wants to be famous! Hey, I can understand the urge of having a bunch of followers, but how can you live with yourself knowing this is all fake? Does this not make you feel even worse- knowing it is all not true?
There are fakers out there that buy followers just for the “fame” but at least they stay away from sponsorships.
Here is another example of a Fake Instagrammer: her name is Lillee Jean- below is a fantastic YouTube video about her that is interesting to watch. She is still active on Instagram @lilleejean with over 1 Million followers, but from what I see she is not doing anything sponsored either. No harm! Just spending her own money on followers, likes and comments.
It is not fair to accept sponsorships with a company when you buy your followers, because the company is investing money in an Influencer hoping to gain something in return. Yet with a Fake Famous Influencer they won't get anything in return. It is also not fair for real Influencers, because they cannot compete with the ridiculous large amounts of likes or followers. Honestly: buying followers and likes on Instagram should be a crime – these Fake Influencers are real scammers! They scam companies out of thousands of dollars!
I do not understand why companies even work with them- do they not see what is so clear to me? I wrote in this article how to spot Fake Influencers (and I have a much better number to easily see if the Influencer has Influence: their Affiliate commission- a real Influencer has proof on the amount of Affiliate commission they achieved for example on Amazon or rewardstyle- this shows the true Influence one has!). Do companies still not know how to spot Fake Influencers? Apparently so if I look at this account! She is getting one sponsorship after another!!!
Does anybody remember the famous quote by Andy Warhol:  "In the future, everyone will be world-famous for 15 minutes." (Though he might not actually have said it according to newer research lol). I guess in a way Instagram is the platform for that. However, if most followers are bought- these Influencers are only world-famous in a parallel world of bots and spam accounts.
I am in disbelief how many Influencers are buying their followers (and likes and comments)- it is so easy to see on Socialblade. I tell you: most Influencers that have more than 100K followers have bought a huge amount of their followers.
How can someone think it is OK to buy over 300K followers?!? It is just ridiculous. This Influencer started her Instagram account at the end of 2018 and in the beginning of 2020, she started buying followers in ridiculous amounts. That is the way her account grew. She bought her followers! She also buys her comments and likes. Yes, she still gets real comments and likes from other Influencers- but merely 100-200 on each picture. Real Influencers are following her and admiring her because they do not see what I see! They hope that one day they will be just as big as she is! What a misery! Admiring a faker!

She gets more than 10K likes on each of her posts. Most of them are bought!!! So easy to detect. Just watch how fast she gets the likes after posting and then see which accounts like her pictures- you can immediately see these are spam accounts (usually from Asia)- and the funniest thing? Click on these accounts to see if they follow her. No, they do not. Bahahaha! They like her picture immediately after she posts it, but do not even follow her? What a scam! 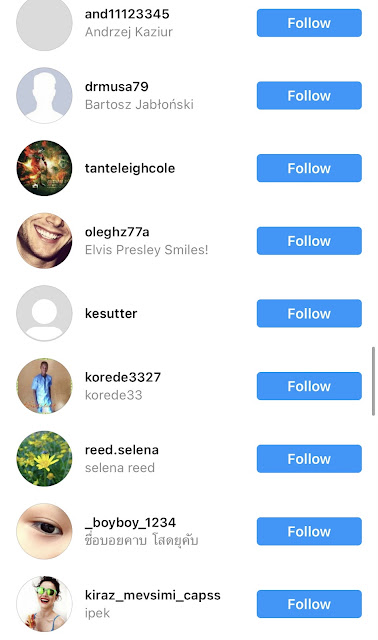 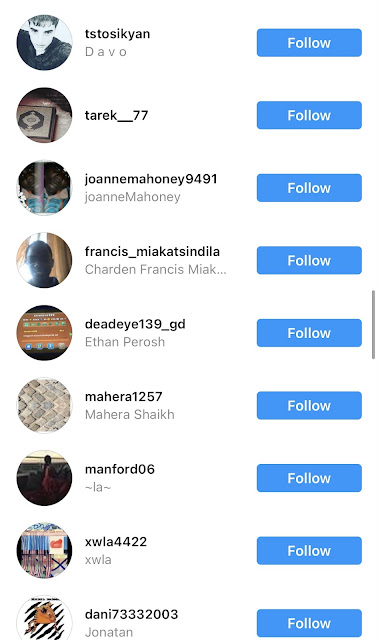 And you know what? She must spend thousands of dollars to get these amounts of likes, comments, and followers! Thousands!!! Ridiculous! So, she makes thousands of dollars with sponsorships, but spends the money on likes, followers, comments. But why? From what I can see it seems like she has money- the house, the kitchen- it all looks very sophisticated. So, I can only imagine that she feels the need to feel in a way “successful” – or even “admired”? At the same time, it must make her feeling sick to know she is a Faker! And why in such ridiculous amounts? 300K? What in the world makes her think that she should have that many followers? I am on Instagram for 8 years and I am nowhere near that. And I do have not only an Instagram account- I have 2 YouTube channels (30K and 15K) and write a blog with 60K views/month! Sure, I am jealous of Instagram accounts that have grown ORGANICALLY. I am sure not jealous of a FAKER.
She has also barely followers on any other platform - because often it is the other way around: you have for example a large following on YouTube and that is why you gain Followers on Instagram. Not so with this candidate. In fact, she has 0 subscribers on YouTube (having uploaded 4 videos with 2-4 views on each), 360 Followers on Facebook, 9 Followers on TikTok and her blog is too small to even get any data – meaning merely to no visitors. Usually with 340K Followers on Instagram you would think you have a couple more on other platforms as well, wouldn't you?
Why do I feel bad exposing her- when she is doing the real harm? She is taking away sponsorships from real Influencers that might really need the money! She is a scammer!!! And I am not having it. Buying followers, likes and comments is NOT OK!
The question that is left is: why? Why does she -and so many others- feel the need to buy followers? Is it the urge to appear famous or successful?
So, what should we do? UNFOLLOW FAKE INFLUENCERS!
But do not send hate. Nobody deserves hate.
If you enjoyed reading this, you might like this too: MARINA DE GIOVANNI INSTAGRAM ACCELERATOR- IS IT WORTH IT?