How do you spot a FAKE Influencer? 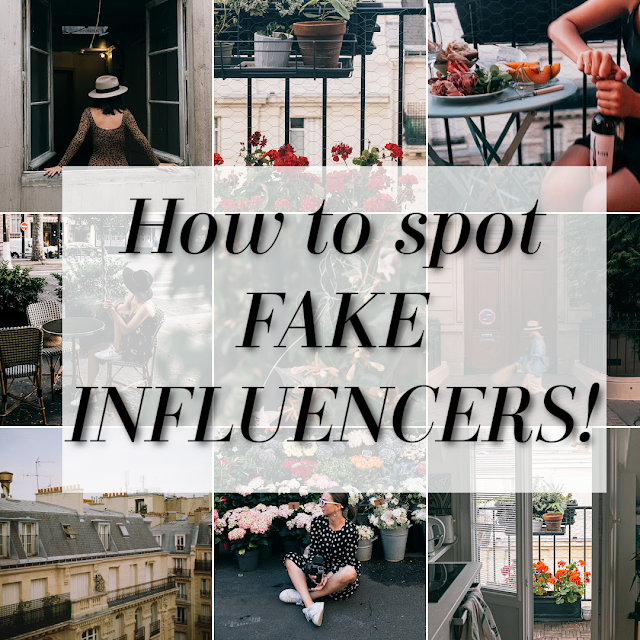 I just asked you in my Instastory if you know how to spot a fake Influencer (aka a FAKE FAMOUS INFLUENCER!) and many (60%) did not. So I decided to write up some tips for you how you can make sure the Influencer is REAL or FAKE! I find it personally very easy to detect, but I am on Instagram since 2013 (since 8 years dude!) and I know a little about it.
Especially if you are a business that wants to invest in an Influencer you might want to make sure the Influencer has one thing: INFLUENCE! Cause I am in true shock how many brands invest in Influencers and pay them thousands of dollars for a sponsorship, but the Influencers they choose are totally FAKE (what do I mean by fake? I mean they buy the majority of their followers, likes and comments! Meaning it looks like they have big influence, while in fact they have barely to none!).
I will also tell you later something that might be a better number (than follower and like numbers) to look at, because this is the true impact an Influencer has!
Alright! Ready to expose fake Influencers? 😏

1. Check the data on Socialblade!!! 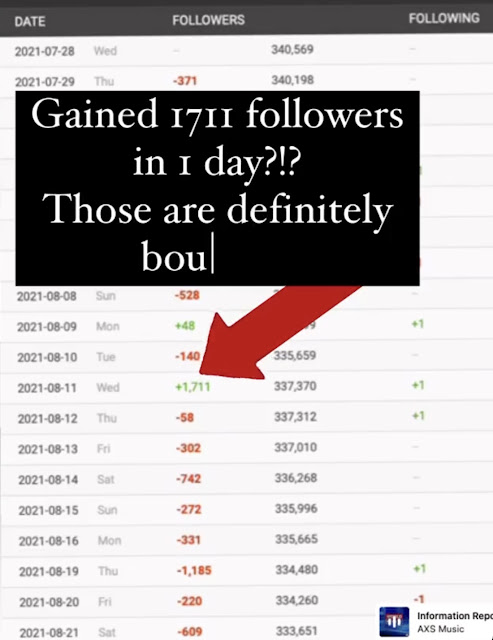 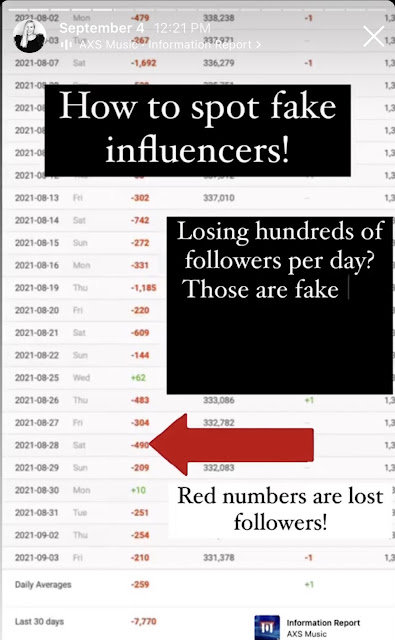 In fact this account lost over a span of 30 days over 7000 followers! That is not natural! You would only lose that many followers naturally, if you are part of some online drama or the like (*cough Tati, James etc).
She has definitely bought followers and is losing them and either "forgot" to fill up new followers or is not fast enough in buying new ones (meaning she is losing more followers than she is able to buy). She has a total of over 330K followers and you can be sure she bought most of them!!! 😠
And yes: she is getting sponsorships from brands for faking it!!! 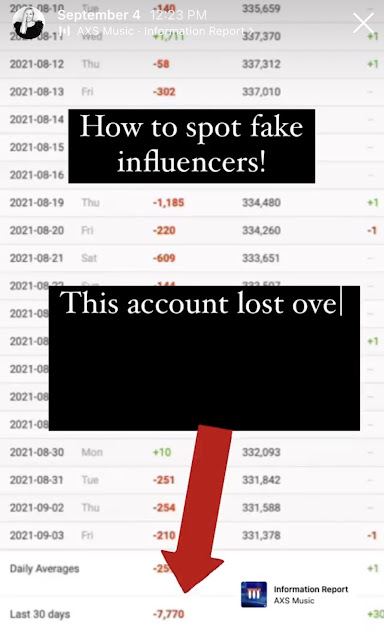 Check out the Socialblade profile of this FAKE Influencer below! She is buying literally thousands of followers and has a total of over 1 Mio followers!!! At the same time she is losing huge numbers of hundreds or thousands followers every day (again: shell accounts that IG is deleting). 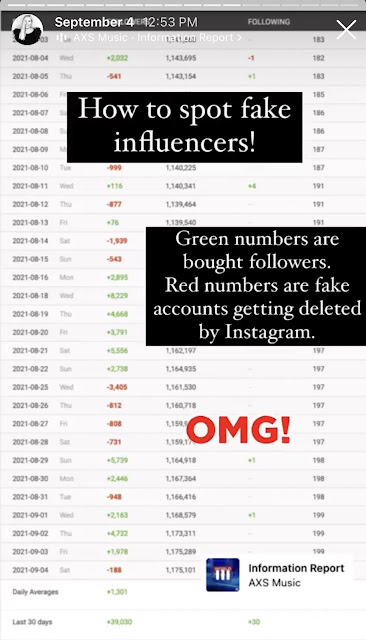 This person is 100% buying her followers. No Influencer is gaining that many followers naturally (except you are a celebrity like Kim Kardashian or you become super popular on another platform like YouTube or maybe have a feature on tv). 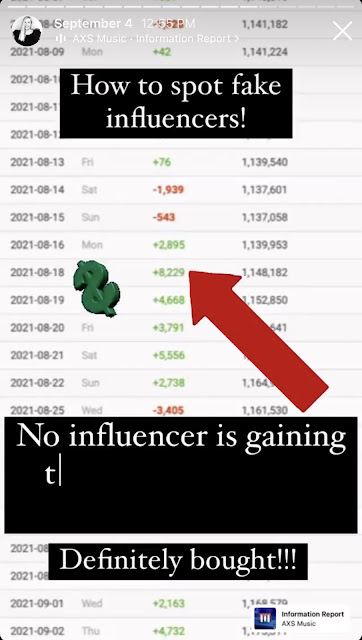 2. Check out the Influencers comments!

While everybody can get spammy comments (even non-fakers) if there are hundreds or more of comments like this, this is an indicator that the Influencer has bought these comments. Check the quality of the comments: are they very generic, or only emojis, or comments that do not seem very personal? Probably purchased by the Influencer! 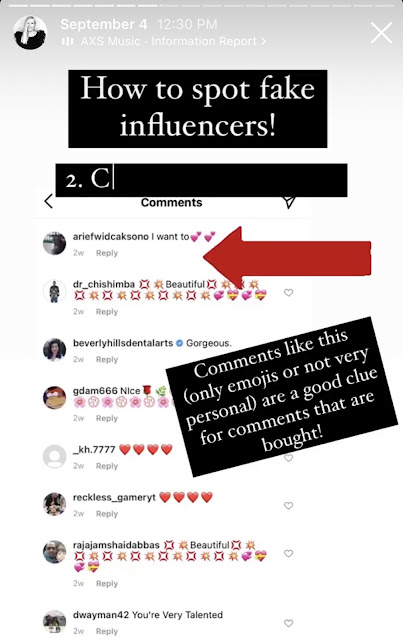 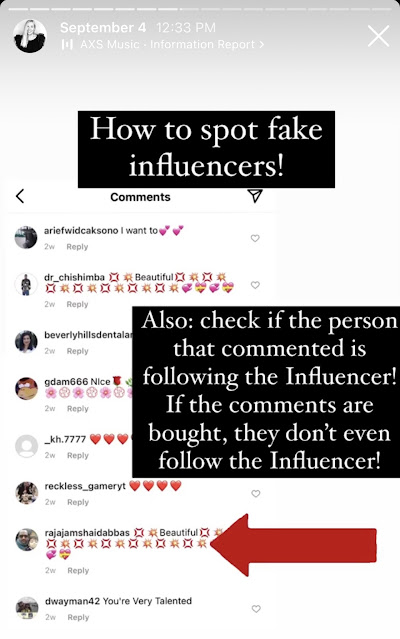 Here is another example of a suspicious double comment - 2 different accounts with the same chronology of weird emojis. 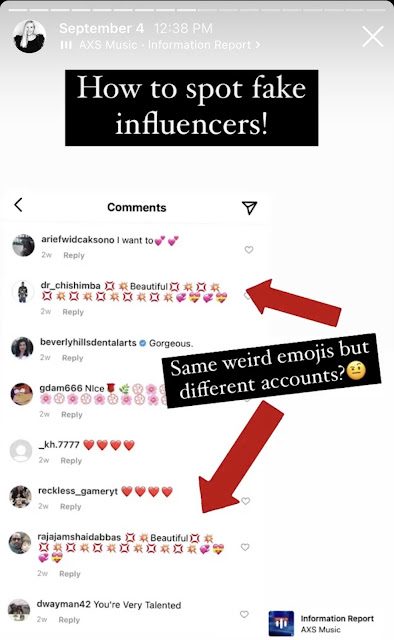 Also: check out the Followers of the Influencer- if it is a U.S. based Influencer, should not be at least half (or more) of the followers be in the U.S.? If you are a U.S. based business, would you not want to work with an Influencer that has the majority of their followers in the U.S.?
If on top of it most followers are from Asia, India etc and the accounts look like shells (they do never post anything, maybe do not have a profile picture, have generic names like 123, posted only 1 photo) they might also be fake accounts that the Influencer has bought. 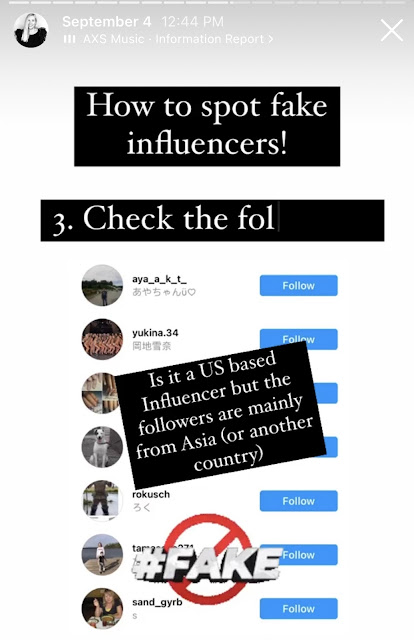 Another indicator: has any of the followers even liked any of the recent posts- or ever liked anything? However, this point is a little harder to proof as many followers really do not like all the posts of an Influencer. So this alone does not proof anything. 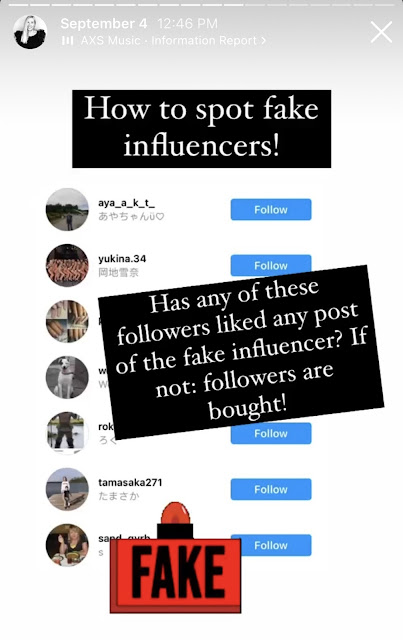 3. Check the ratio of number of followers to number of comments or likes.

For example: if the Influencer has 300K followers, gets maybe 8000 likes on a single post but only 15 comments that seems very out of balance. There should be definitely many more comments!

You know what is a much better measurement of the true impact of an Influencer than the number of followers, likes and comments on Instagram? Ask them to show you their rewardstyle Affiliate commission or Amazon commission or another Affiliate commission they generated over the span of a couple month. Those are true numbers and they show the true Influence an Influencer has! Simple as that!!! 💵
If you are a business and you are still unsure if an Influencer has any Influence, I can help you find out! Contact me and I will help you figuring that out!
If you are an Influencer you might be interested in reading: MARINA DE GIOVANNI INSTAGRAM ACCELERATOR- IS IT WORTH IT?