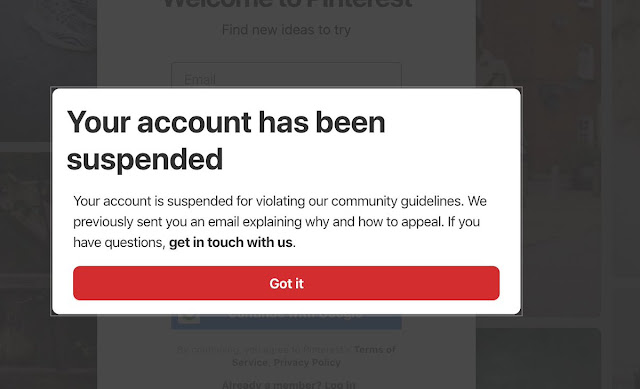 My Pinterest Account has been suspended (about a month ago) and I have tried literally EVERYTHING to get it reactivated - but nothing has worked. I am on Pinterest since 2013, I had more than 15k followers and 600k page views/month! I created thousands of pins!

Here is what happened:

On 09-11 I was unable to pin any images from my own website  with the following error: “We blocked this link because it may lead to inappropriate content.” (see below) 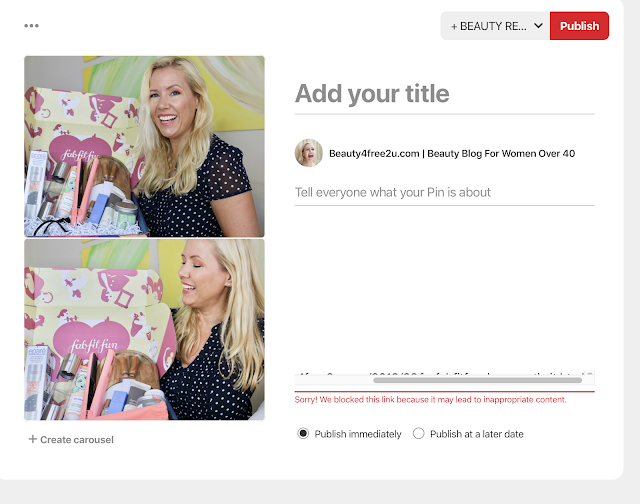 I read very careful through all Pinterest guidelines and I am not aware of what could have caused this. I did not even pin that much lately. I really don’t know what caused this, but I am a real person, not a spammer and I do not try in any way to “trick the system” etc. I don't use Pinterest for anything like spamming or anything like that. I was absolutely devastated!

After appealing this decision multiple times and receiving the same automated response over and over, I was informed on 09-16 that in addition to that my website was blocked, my Pinterest Account was also suspended, because it would go against spam policies (see below). 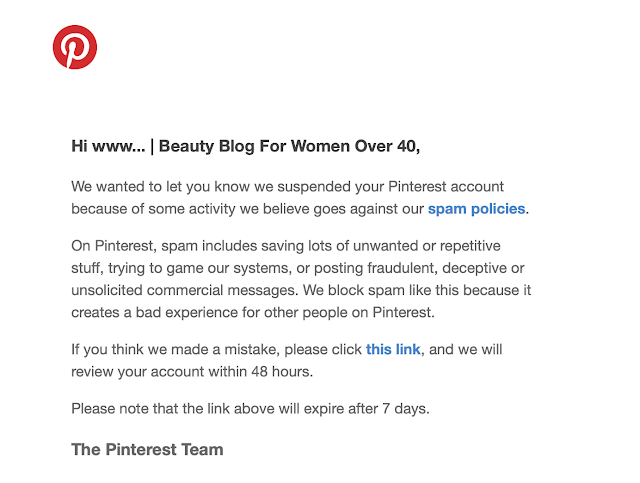 However on 09-19 I was informed that the block of my website was removed. 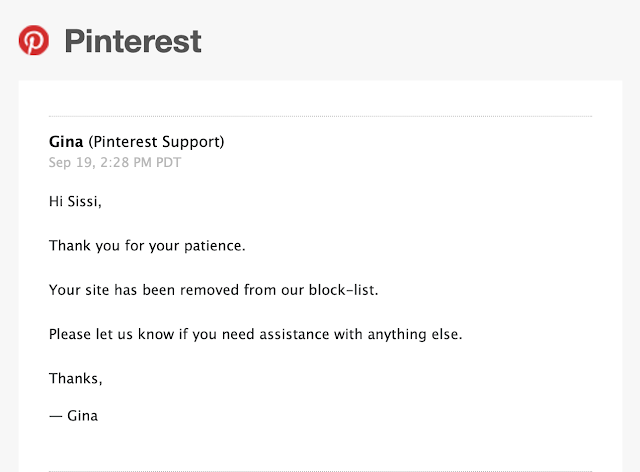 So I still couldn't pin any images from my own website.

I generate 91% of my blogs traffic through Pinterest! 91% y'all!


I googled "How to get Pinterest Account reactivated" and read how somebody who simply appealed got it reinstated- however I tried that at least 5 times- not once did I receive a response that wasn't automated.

I read another blog how someone opened up a BBB (Better Business Bureau) complaint against Pinterest and that worked for her to get her account reactivated within 24 hours! With big hopes did I also open up a BBB complaint (you can find it here on 9/16). However, I received AGAIN the same automated response From Pinterest that I would violate their Spam policy. It didn't work!!!

I tweeted to Pinterest that I am not a spammer (see below) and received: no response from Pinterest. 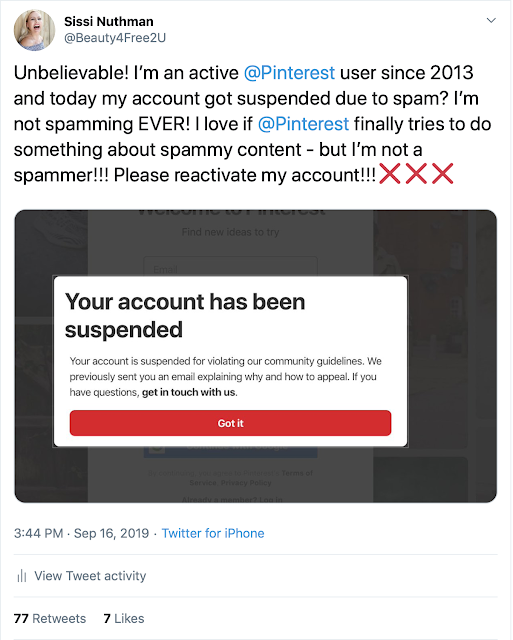 I did not know what to do anymore, but I tried one more time to appeal the decision to receive- yet again- the same automated response from Pinterest that I would violate their Spam policy.

I also asked Tailwind for their help, since I pinned almost exclusively with Tailwind. I received a fast and friendly response from a human named Sarah (something Pinterest should try)- but they also could not help me to reinstate my account. Sadly I will have to cancel my contract with Tailwind now too, as this is a paid service.

So, the next and last thing I tried was: writing a letter! An old fashioned letter. I thought: if this isn't proof that I am a real person and not a spammer- then what is? 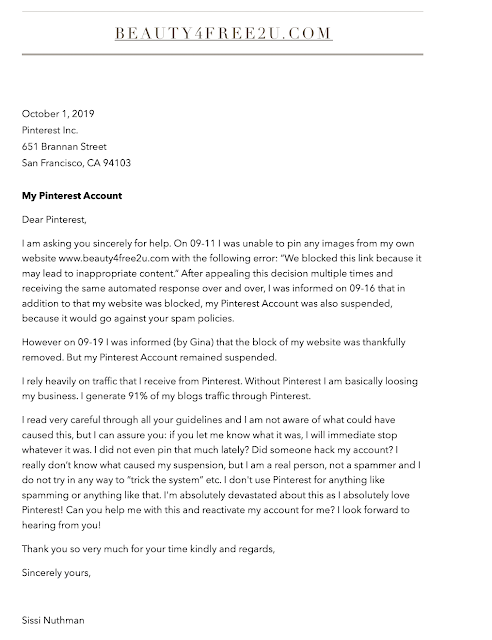 However, they received this letter (according to my Tracking No) last Monday and I have not received a response whatsoever...

Today I decided to open up a new Pinterest account- not that I am ever going to be able to recover my thousands of pins that Pinterest deleted from its platform, my lost 15k followers or my 600k page views- like EVER!

But I thought, at least I could start pinning new content again. But to my huge surprise: 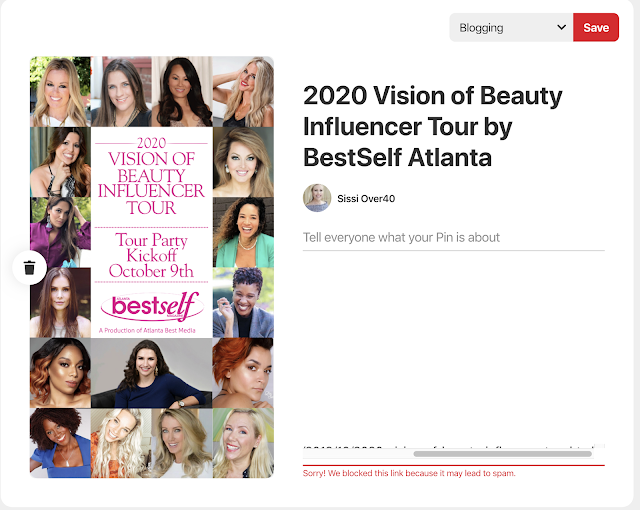 This is absolutely ridiculous! And from what I can see on all the complaints on the BBB site- I am not the only one! Thousands of accounts are getting suspended.

While I appreciate the effort to eliminate finally spammers on Pinterest- they got it all wrong and are deleting the wrong accounts! I am definitely not a spammer and many others not either.

The ironic thing is, that a couple month ago I was complaining to Pinterest about the huge amount of pictures on Pinterest that are stolen- pictures spammers steal (from me and other real bloggers/humans lol) and then re-post on Pinterest- but leading to their spammy sites.

Below I was complaining on 05/16/2019 on Instagram and tagging Pinterest and showing them all the images (red circled) that were mine, but posted on Pinterest by spammers. Of course I never received a response from Pinterest.

I have reported many times to Pinterest when I saw my stolen content. However: the process of reporting stolen images is a multiple step process that takes a lot of time- each time for each picture you have to include your name, address and much more information. You can't "bulk report" or something and I can find (to this day!!!) easily thousands of stolen pictures from me on Pinterest!

This is so ironic because here I am being kicked out of Pinterest as a real human being accused of being a spammer- all the while the real spammers are still on Pinterest using MY CONTENT!!!

IN FACT I JUST WENT ON PINTEREST with my new account "Sissi Over40" and after clicking on Pinterest on my top 5 categories my feed revealed almost exclusively my own photos- but NONE OF THEM ARE LEADING TO MY WEBSITE!!! ALL STOLEN BY OTHERS AND LEADING TO THEIR SPAMMY WEBSITES! Excuse my bad language but I AM SO PISSED Y'ALL!


So, why is Pinterest suspending thousands of accounts? The reason is to keep spammers of the platform- however: I am sorry to tell you Pinterest, but you got it all wrong! Accusing real bloggers of spamming but keeping all the spammy content and kicking us out! Not even once did I receive a response from a human! So, are you trying to eliminate spammers by using bots? How strange is this?

Have you been a victim of Pinterest´s huge suspension roll?