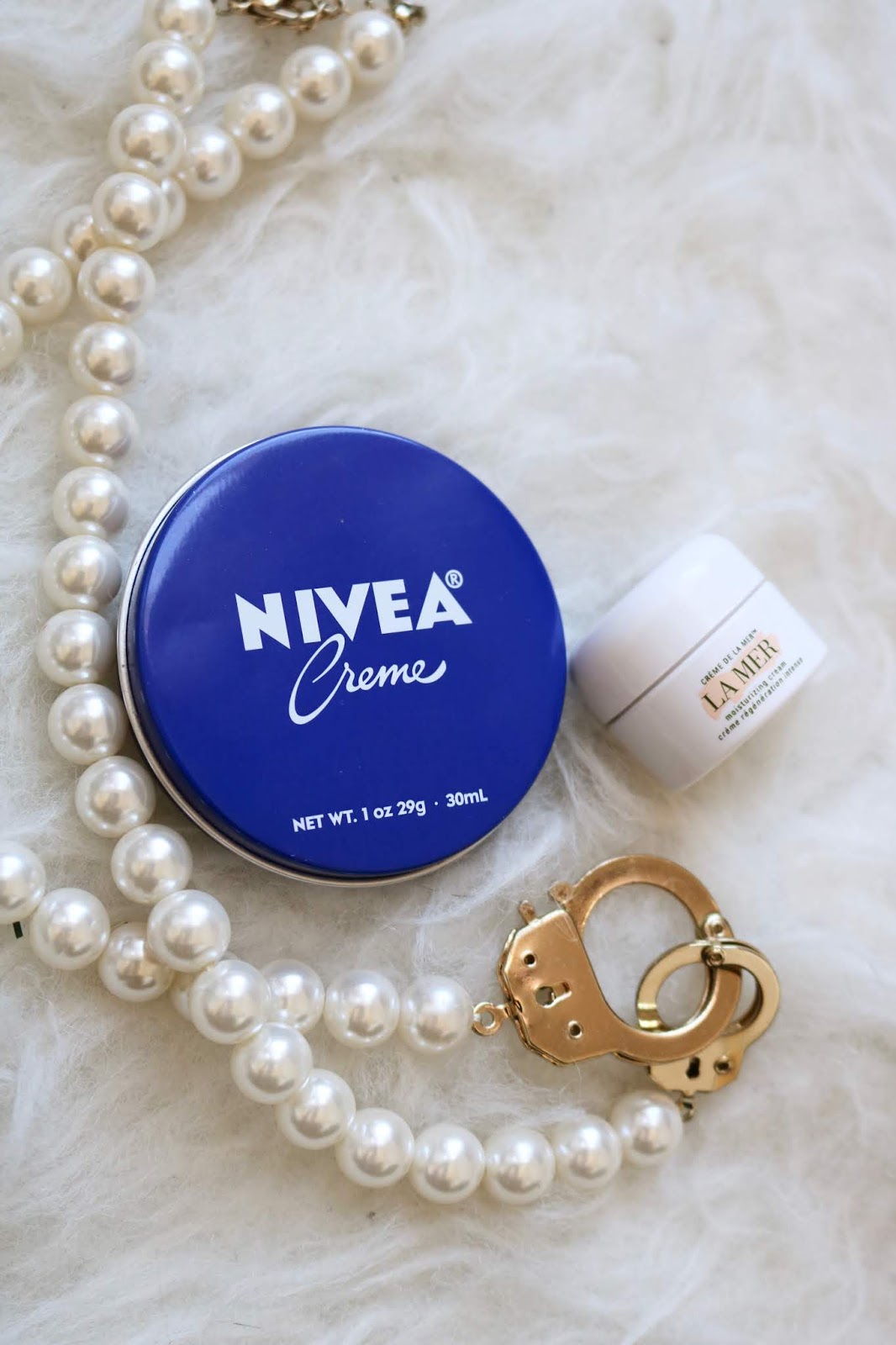 I have heard many times that the NIVEA Crème is a cheap dupe for the outrageous expensive LA MER Crème and I was curious if this is true. As a long time lover of the German classic moisturizer in the blue tin (I am using this since basically more than 40 years! Read also: 7 amazing uses for Nivea), I am definitely the right candidate to make a final verdict: is the NIVEA creme a dupe for the La Mer Creme de la Mer?

Since I did not want to spend $325 for 2 oz of product, I got my hands on a mini size instead (you can get at Sephora 0.5 oz for a whopping $85! Haha!). You will be surprised how tiny this mini size actually is! But in defense: you really don´t need much product as this is a heavy moisturizer. ;-) 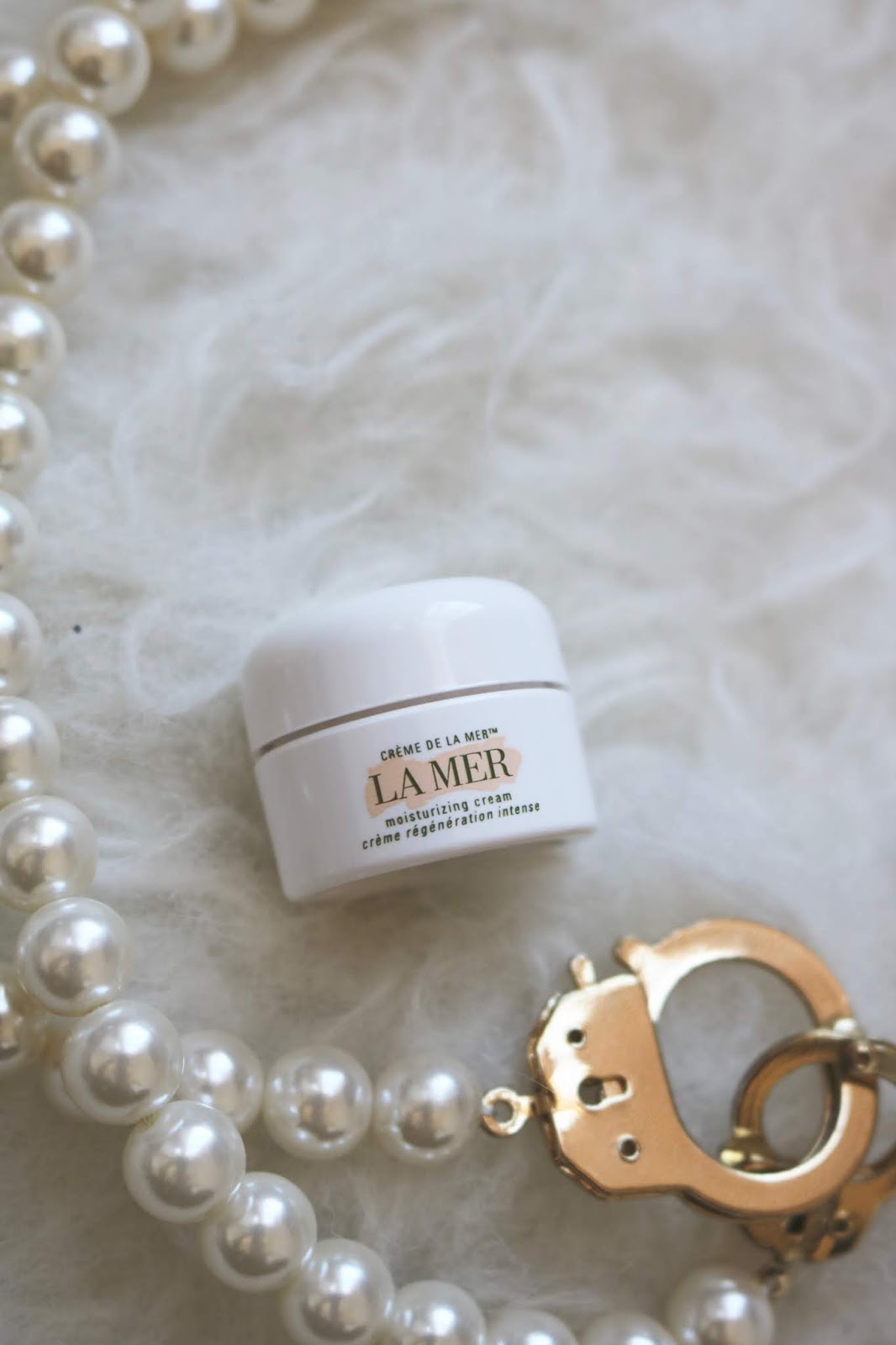 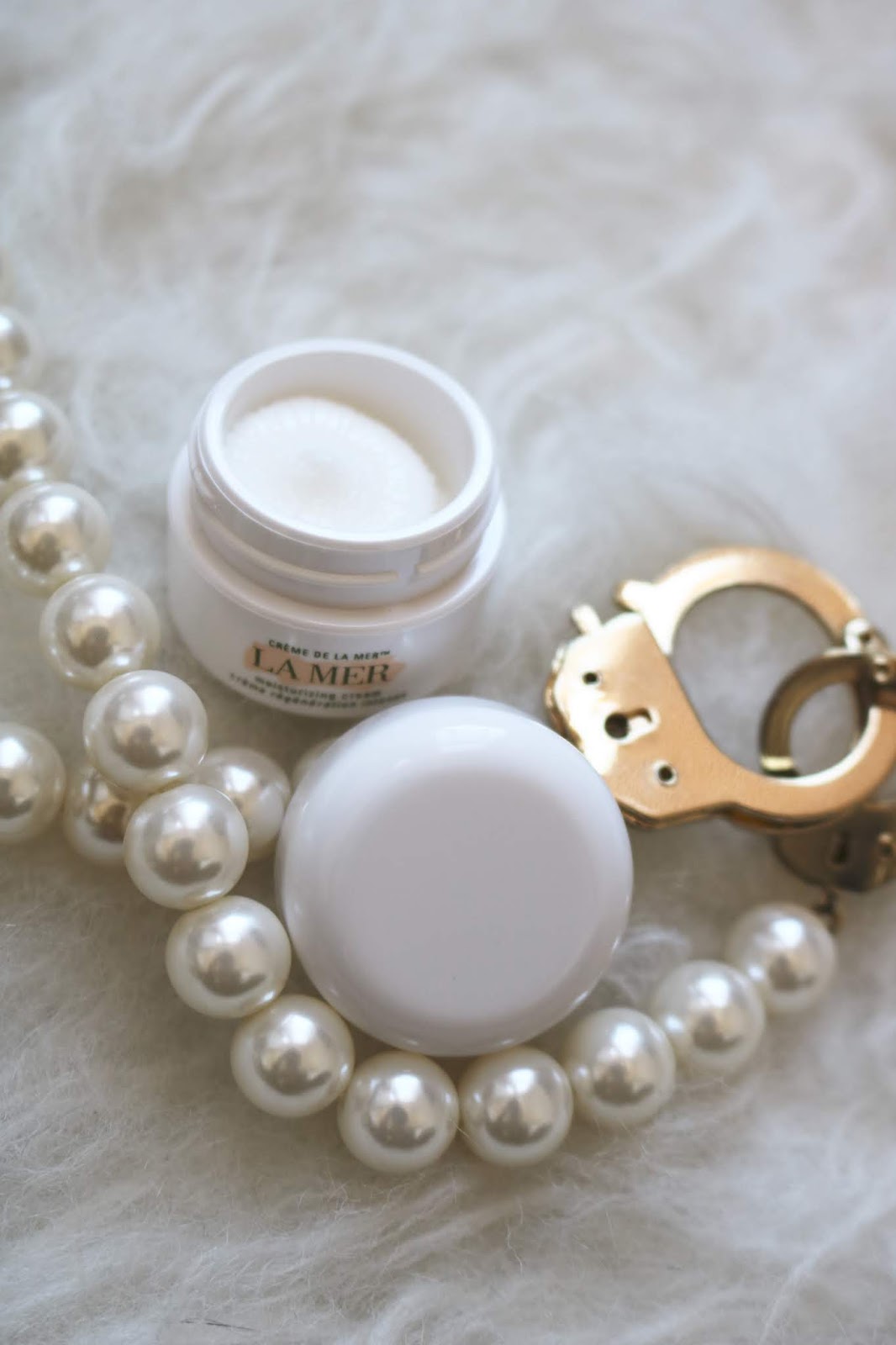 Definitely not everybody can afford to use La Mer on your elbows and knees- like Kate Hudson in this little fun Instagram video! ;-)

Kicking off my campaign with @lamer is a pleasure to announce! Not only do I absolutely love and adore the products but creatively I had the most dreamy time working with the director @loren_denis We spent time in Iceland exploring and shooting all over and she was an incredible leader! Can’t wait to see what she continues to create in her future. All the local crew in Iceland... you rock! Miss you all and can’t wait to see you and your beautiful country again! Hope you all enjoy our campaign. We had a blast shooting it. You can watch @LaMer #LaMermaid #LoveLaMer #LaMerInfluencer #WomenInFilm #WomenDirectors 🧜‍♀️🧜‍♀️🧜‍♀️🧜‍♀️
A post shared by Kate Hudson (@katehudson) on Mar 1, 2018 at 11:05am PST 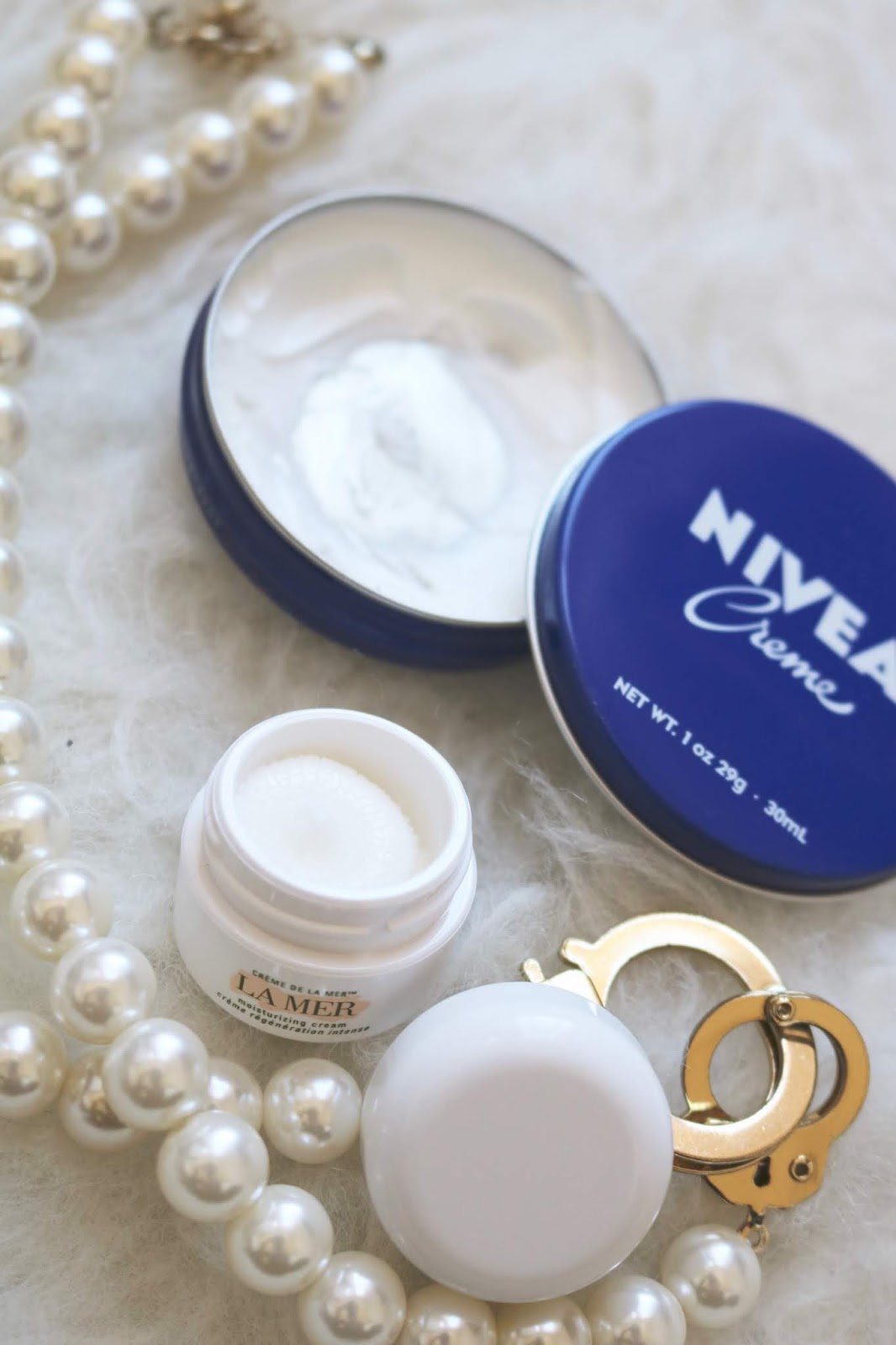 
Immediately after opening up my mini size La Mer creme, I could see and feel- yes this feels and looks exactly like my all time beloved Nivea!

I love to use Nivea on my (currently extremely dry) under-eye area and so that is what I am using since 2 weeks the La Mer Creme for. And what can I say? It performs exactly the same way as Nivea does! (Read how to use Nivea as an eye cream!).


The only difference that I am noticing is the scent- though it is similar- the La Mer smells a bit stronger and more flowery than the Nivea Creme in my opinion.


But let´s get a little scientific here and compare the ingredients, shall we?

Let´s see, if you notice it too? 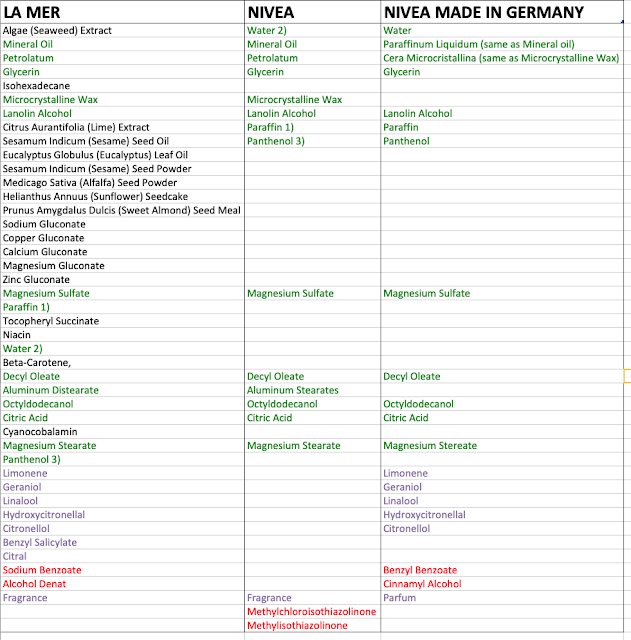 The green marked ingredients are the ones that are included in the La Mer and also in Nivea (both versions- the U.S. and the German). This clearly shows you that virtually ALL ingredients that Nivea contains are also included in La Mer Creme.


While the U.S. version of Nivea includes 2 "mean preservatives" (Methylchloroisothiazolinone and Methylisothiazolinone- wich are both btw illegal in Europe), the German version contains 2 preservatives that are less toxic (Benzyl Benzoate and Cinnamyl Alcohol)- however the La Mer also contains also a preservative (Sodium Benzoate) as well as Alcohol Denat. (wich is also used as a preservative but also to make creams feel lighter, but it can feel also drying to your skin).


The La Mer contains a whole array of additional ingredients, such as algae extract, sesame seed oil, sunflower seeds and sweet almond seed meal that Nivea does not contain. Also favorable in the La Mer: it contains Niacin (Vitamin B3).


So what was so surprising for me to discover? See the purple marked ingredients in my list above? Those are all fragrance ingredients and the La Mer fragrance is almost identical with the "recipe" of the German version of the Nivea creme! From Limone, Geraniol, Linalool, Hydroxycitronellal and Citronellol- all included in the famous La Mer but also in the classic German Nivea creme! Isn´t that something?


Another interesting fact I came across is that apparently Dr. Max Huber (a German born aerospace physicist) created the La Mer creme in 1965 - allegedly because he suffered severe burns in a lab explosion in the 1950s while working on a rocket stabilizer and wanted something to heal his wounds. However this little story might be more of a marketing propaganda based on the fact that there are absolutely no records of his accident at NASA to find (hello google)!


Well. Not only was Dr. Max Huber born in Germany (and I am therefore suspecting that he knew about Nivea- as this was (and is) a widely known cream in Germany used by virtual everybody) but Nivea has also been around much longer than La Mer. Nivea was created in 1911 in Germany while the La Mer creme was created in 1965.

I am kinda suspecting that Dr. Max Huber actually really created a knock-off version of Nivea (but for richer consumers lol). Invented by a German- but selling in the U.S. during the 60s when Nivea was probably not a very well known brand in the U.S.? Just a little suspicion! But the list of ingredients is in my opinion just too similar to be an accident...


So, what is my overall verdict? Is the Nivea creme a dupe for the La Mer Creme?

The La Mer contains some beautiful additional oils that aren´t in Nivea. However: I find it very appealing if a list of ingredients is rather short than super long. Simple is good in my opinion.

The La Mer also smells a little different than Nivea (as mentioned more flowery, while Nivea has a cleaner and fresher scent) but the consistency is definitely the exact same and it performs the exact same when applied.

If La Mer is worth to spend $325 has to be the decision of the size of your wallet-  if you can afford it- then why not?

But if you can´t afford it (like me!) then you are definitely safe to use Nivea instead. However: I recommend to buy the German version of Nivea to avoid the 2 (potential aggressive) preservatives that the U.S. version is (strangely) using!