7 AMAZING USES OF NIVEA & IS NIVEA FROM GERMANY DIFFERENT? 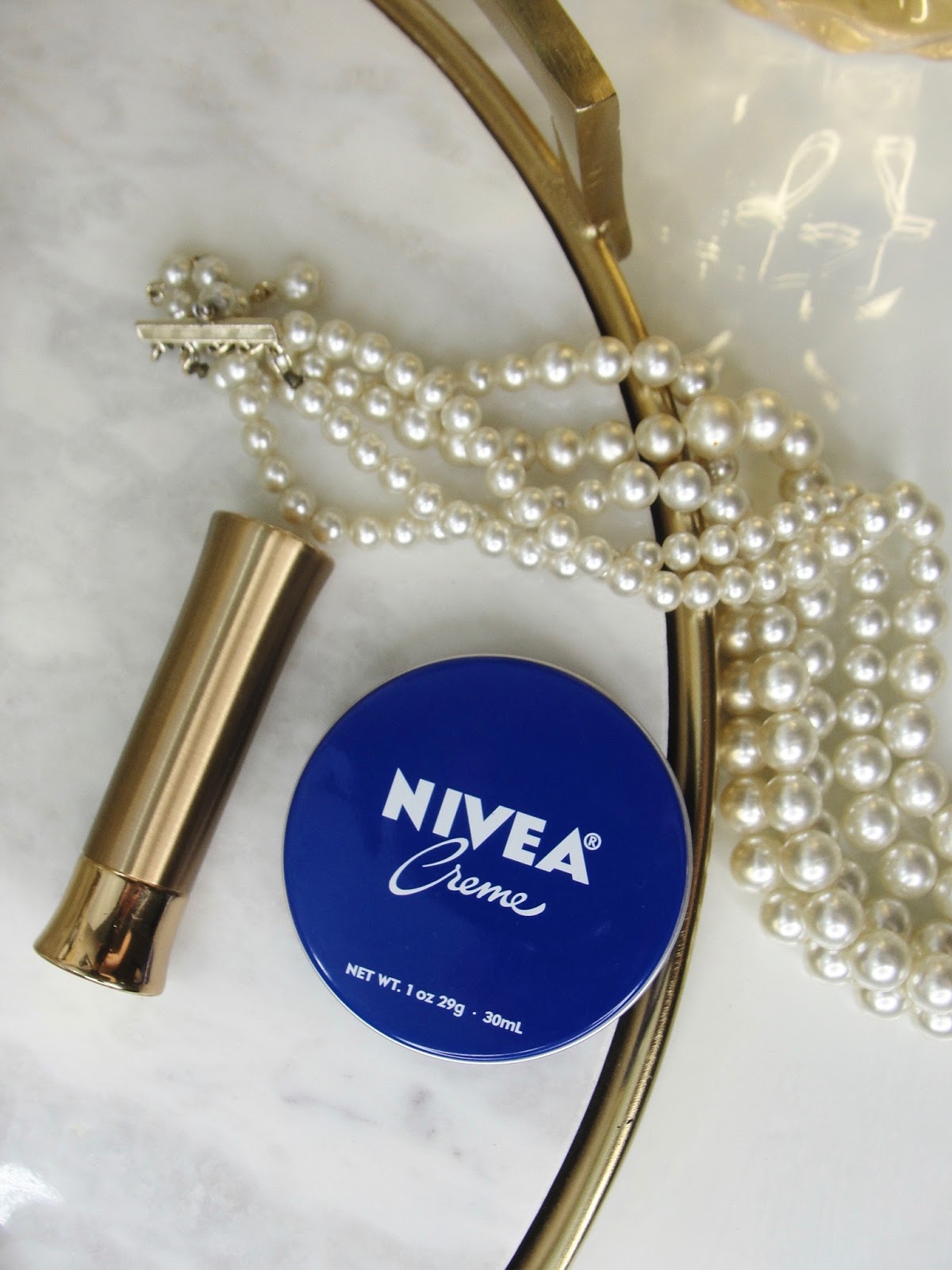 I always have a tin of Nivea in the house- I think every German women does! It is so versatile! It´s an iconic cold cream used in Germany since centuries. So today I have 7 amazing uses of Nivea for you and I will also answer the question, if Nivea from Germany is different than Nivea from the U.S. (I have seen this question pop up multiple times in the online world!)

BTW, in Germany we pronounce Nivea:


Yes, a very very long NEEEEH in the beginning! Here is a 10 sec video where it is pronounced correct. WATCH IT BECAUSE YOU WILL BE SURPRISED! 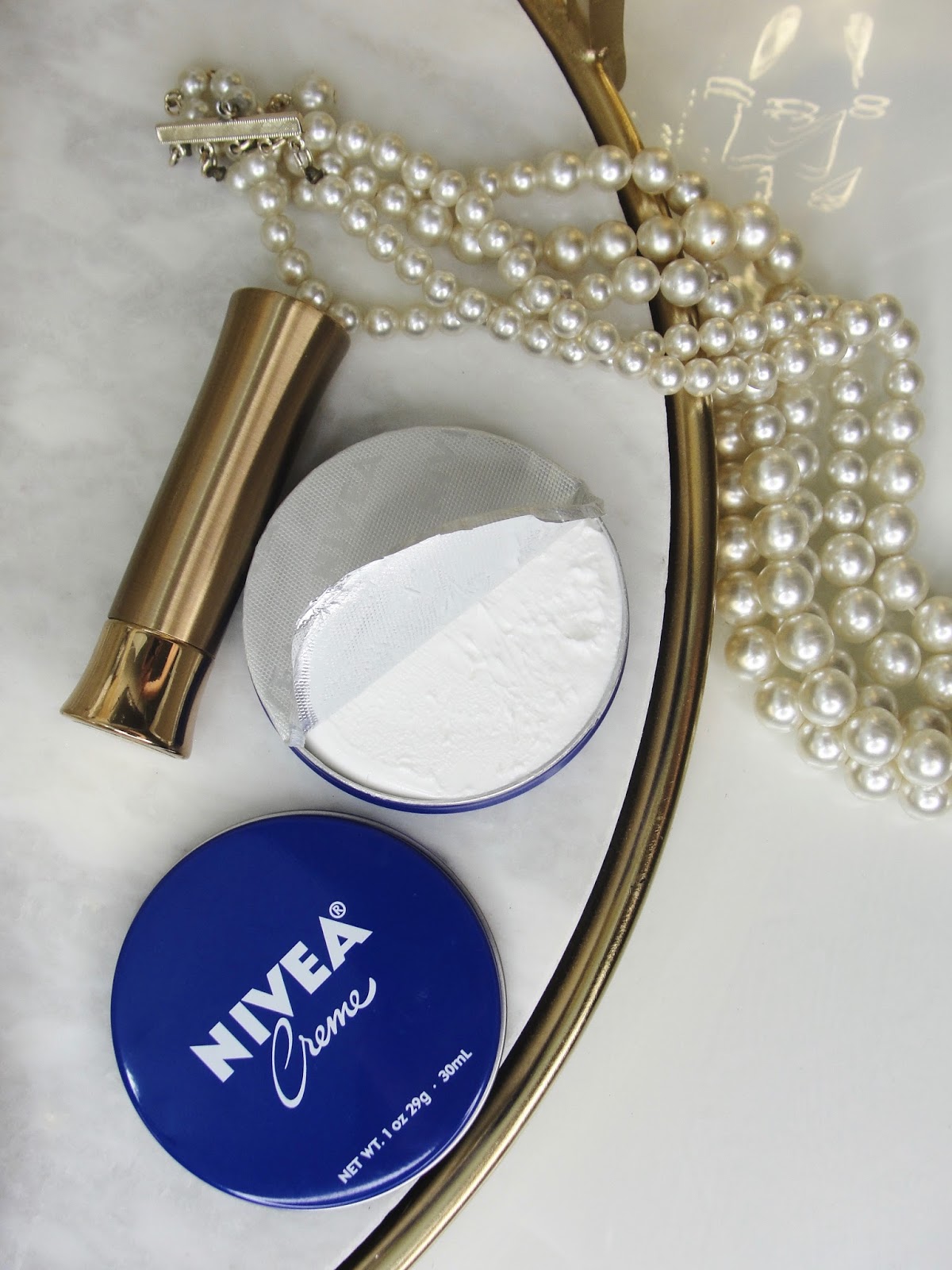 You can use it as a makeup remover! You know like a cold cream that you put on your face- rub it gently in and then take it all off with a soft tissue! Especially helpful if you used a ton of makeup and foundation.

You can use it as a hand cream for extra dry skin! If my hands get really dry, Nivea is the only cream that really delivers ultra hydration! Yes, it will be a bit greasy for a couple minutes. But it helps so much! The un-greasy (is that even a word lol!) lotions are just not enough for super dry hands!

You can use it as a foot cream to soften those hard calluses! I like to put a sweet amount on my feet at night and then put cotton socks on to avoid a mess on the sheets! The next day your feet will be so soft!

You can also put it on your elbows and knees- especially when it is cold outside! Immediate relief!

I just remembered something! Did you see this video with Kate Hudson (see below)? I had to really laugh out loud- while I think she looks absolutely gorgeous and natural- who can afford to put a $315 cream (the iconic La Mer Creme de la Mer) on their knees and elbows?!? Not me! Try Nivea instead! Rumor goes it is a dupe! (I have never tried the La Mer cream, it is definitely on my bucket list lol).

UPDATE: I have tried the iconic La Mer Creme an compared it with Nivea- read it here!

Kicking off my campaign with @lamer is a pleasure to announce! Not only do I absolutely love and adore the products but creatively I had the most dreamy time working with the director @loren_denis We spent time in Iceland exploring and shooting all over and she was an incredible leader! Can’t wait to see what she continues to create in her future. All the local crew in Iceland... you rock! Miss you all and can’t wait to see you and your beautiful country again! Hope you all enjoy our campaign. We had a blast shooting it. You can watch @LaMer #LaMermaid #LoveLaMer #LaMerInfluencer #WomenInFilm #WomenDirectors 🧜‍♀️🧜‍♀️🧜‍♀️🧜‍♀️
A post shared by Kate Hudson (@katehudson) on Mar 1, 2018 at 11:05am PST

If you have a cold and your nose hurts (from all the tissues you are rubbing on your nose): Nivea is your best bet! I never get irritated from Nivea- even on broken skin.

Little trick from old times when I would still wear high heels lol: if you buy new high heels that hurt on the back of your feet: put Nivea on top! It will make the shoe glide on your heel instead of uncomfortable rubbing. 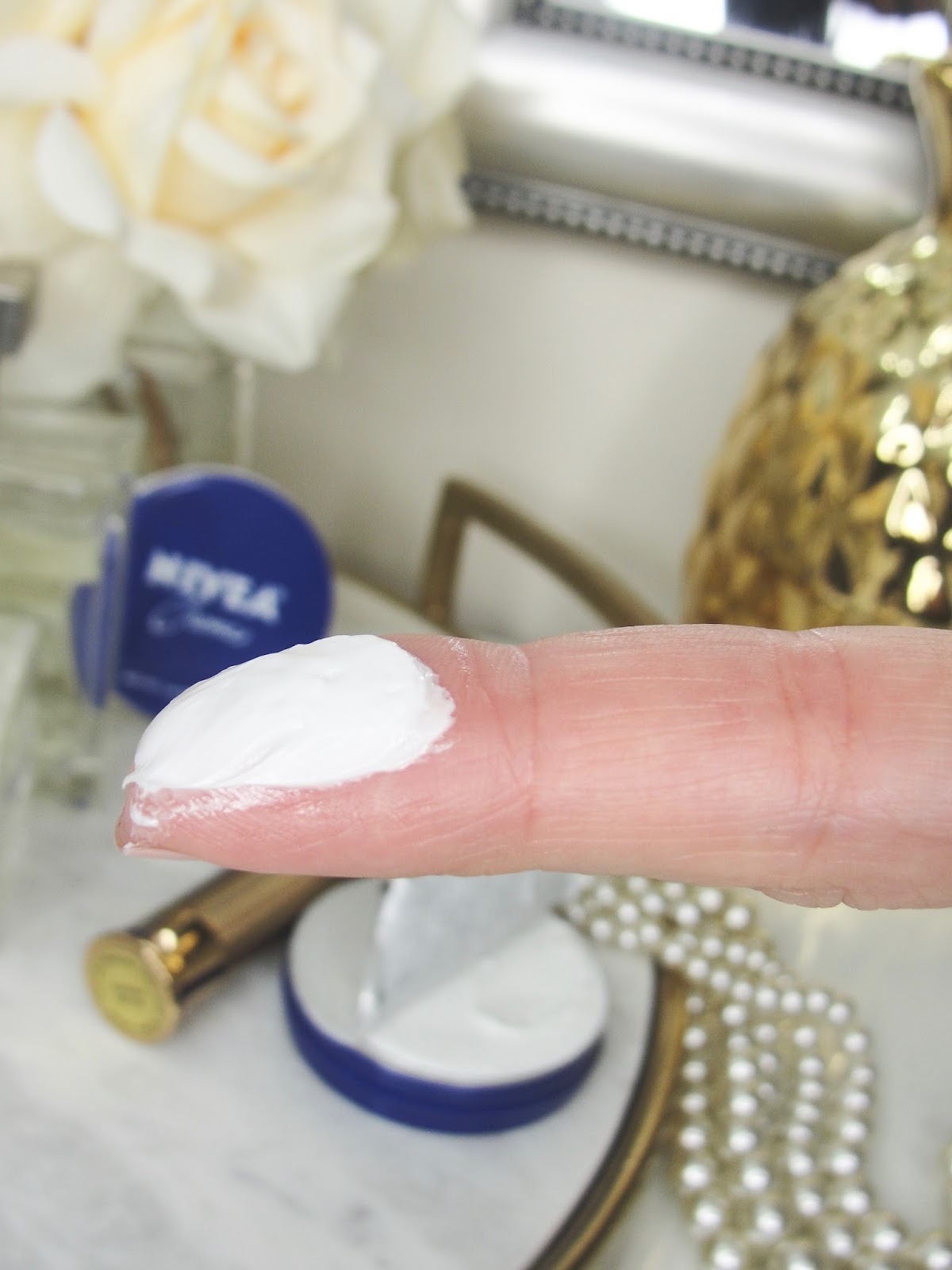 Actually my favorite use of Nivea is to use it as an eye cream, when it is really cold outside- it protects and seals the delicate eye area and doesn´t let any moisture out.

You might think that this feels too greasy to put on your face or eyes, but what you actually have to do is: take a tiny amount of the cream, really only the tiniest amount, rub it between 2 fingers until it changes its consistency from heavy and thick to a thin lotion, and then gently swipe it onto your under-eyes- but please not into your eyes lol. I feel like there is nothing better to make my eyes look less crepey!

Yes, the blue little tin is a little magic and an amazing helper for so many situations!

Is Nivea from Germany different?


Now to the question, if Nivea is different in the U.S. than in Germany?

The short answer is: yes! Let me explain!

The difference is in the pudding!

Check out the current ingredients of both versions below: 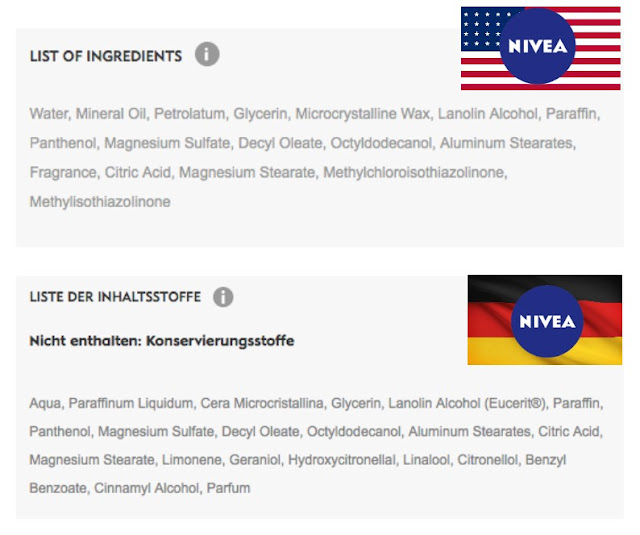 At first sight, the ingredients seem pretty much the same. But a deeper look reveals this: 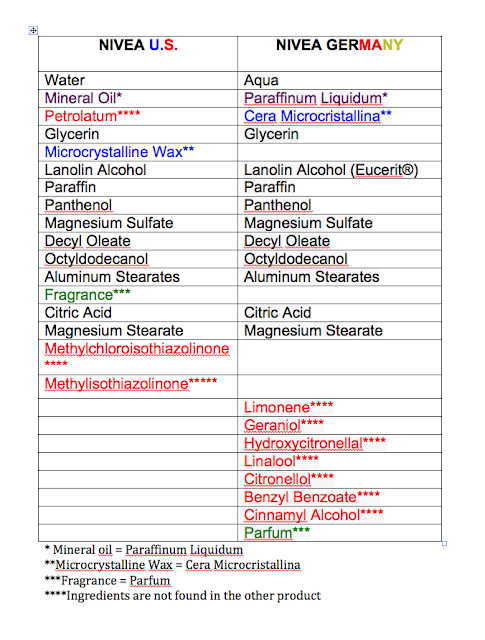 OK: here are the major differences:


1. the Nivea in the U.S.  contains 3 ingredients that the German versions doesn´t include: Petrolatum, Methylchloroisothiazolinone and Methylisothiazolinone.

The very ironic issue is, that the German version claims to not include preservatives. BUT: Benzyl Benzoate is used as a preservative and is according to the EWG associated with allergies and contact dermatitis. However this preservative isn´t as dangerous as the 2 preservatives the U.S. version includes.


But what about the consistency and effectiveness?


As a long, long time user of Nivea I can promise you, that the U.S. Nivea creme works on me exactly like the German version! It has the same consistency, it smells the same- I would never know there is a difference between the German version and the U.S. version (*cough* the Mexicon version) if I wouldn´t read the ingredients! 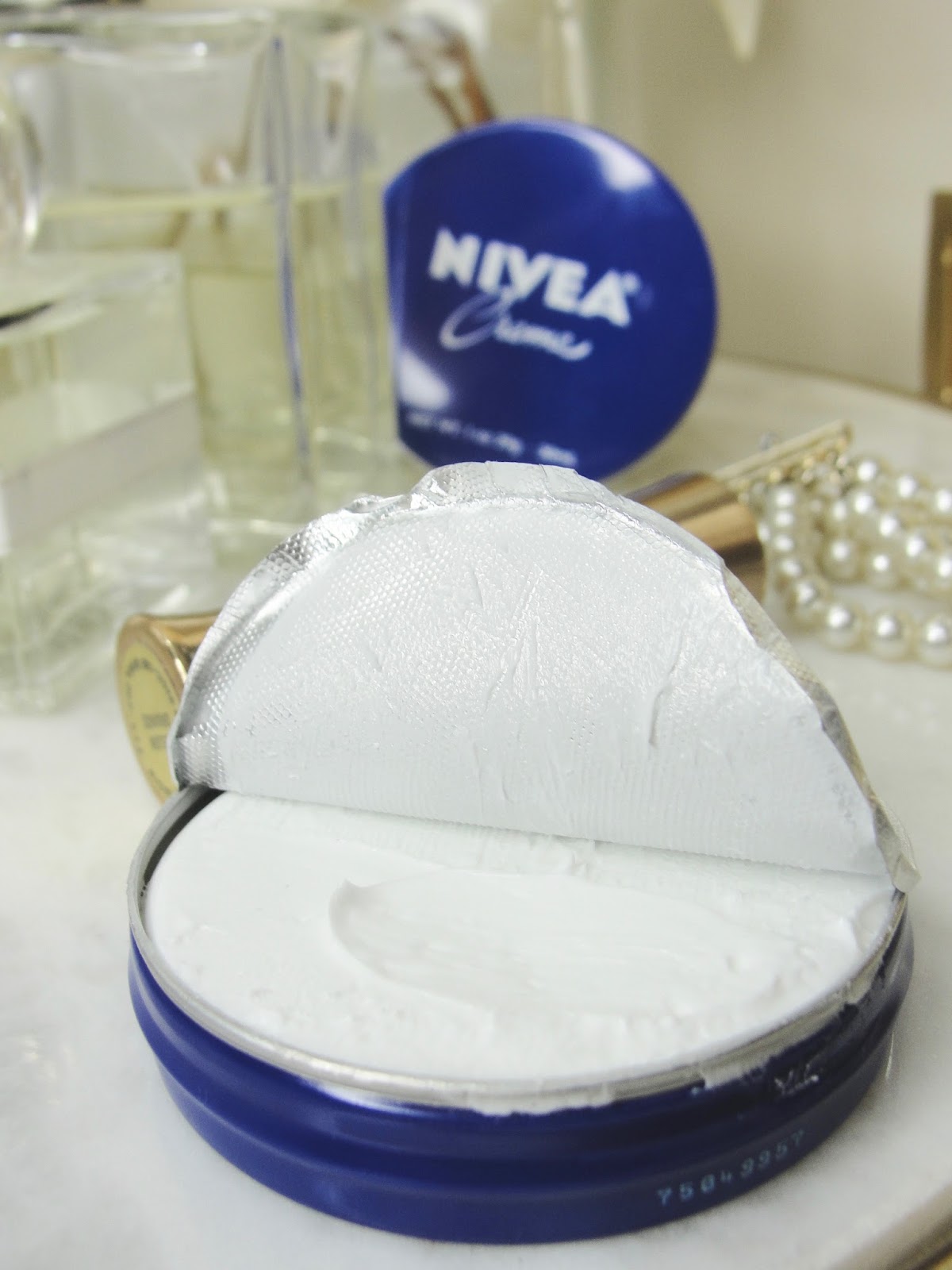 I´ll just keep buying the  German version instead! Online-shopping made it easy to shop international! ;