THE TRUE COST OF FAST FASHION or why I won't buy anything from Shein, H&M or Zara! 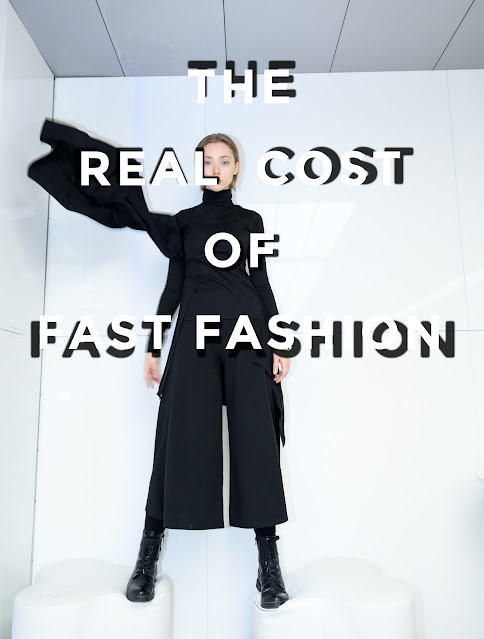 If I can take anything good out of this pandemic it is, that I have educated myself more than ever in my life about so many different issues! “Fast Fashion” is one thing I educated myself on. And I can say with confidence: I will no longer buy anything from Shein, H&M or Zara (and many more).
I think the first time I heard of the term "Fast Fashion" was from Hasan Minhaj in his comedy stand-up “The ugly truth of fast fashion”. I highly recommend watching it!
Since then, I read a lot about the dirty secrets of fast fashion.
So, what exactly is Fast Fashion? Too keep it short and simple: fast fashion replicates designer fashion and trends VERY FAST and sells them to unbelievable low prices.
So, why is this a problem, you might ask?

What is worse is the following: Fast Fashion companies exploit their employees and dramatically underpay them. An Oxfam 2019 report found that 0% of Bangladeshi garment workers and 1% of Vietnamese garment workers earned a living wage!
Fast Fashion typically produces in low-income Asian countries like Bangladesh, India, China, Vietnam, and the Philippines and has always consistently been linked to child labor.
But there is more: worker safety is a major problem, as the catastrophic 2012 Tazreen factory fire and the 2013 Rana Plaza building collapse in Bangladesh proved. Between 2006 and 2012, more than 500 apparel workers died in Bangladesh in factory fires (source: International Labor Rights Forum). Only so we can buy cheap fashion! There is a reason why Fast Fashion is so cheap!

The fashion industry is now the second-largest generator of pollution on Earth! Water pollution from the fashion industry is the result of textile factories dumping untreated toxic wastewaters directly into waterways.
But not only producing fast fashion is polluting the earth. After we are done wearing the newest trends, it lands in our landfills!
American shoppers snap up about five times more clothing now than they did in 1980. In 2018, that averaged 68 garments a year. And on average each piece will be worn only seven times before getting tossed! The Environmental Protection Agency reported in 2015 that Americans sent 10.5 million tons of textiles (the majority of it clothing) to landfills that year. And most clothing contains synthetics, and most synthetics, such as viscose, aren’t biodegradable.
You probably think: “Well, I donate my used clothes!” In case you know where your clothes go to- maybe a church or a homeless shelter: good! However, if you donate to Goodwill, Salvation Army or similar thrift stores, they are only able to resell clothes in very good condition. Because nobody wants to buy any clothing with stains, holes or the like! Goodwill just shared, that during the pandemic they have received so many items that they are not able to resell and ask people to stop people donating “trash”.
A common myth is that sending clothing overseas to third-world countries is helpful. But nothing could be further from the truth! Turns out when our used clothes get sent abroad, their sales compete with other local merchants and textile industries in the area. This competition can put financial pressure on those who may already be struggling to make a profit.
Figures from the U.N. database show that more than $300 million worth of secondhand clothing heads to countries including Chile, Guatemala, India, the United Arab Emirates, Mexico, Tanzania, Honduras, Angola and the Dominican Republic. Instead of being resold or repurposed, these garments often end up wasting away in landfills. Check out these piles of fashion in Ghana in the video below!
My verdict:
I will no longer support fast fashion retailers (such as Shein, Zara, H&M, Fashion Nova, Missguided, Forever 21, Boohoo and more). I have in the past worked with fast fashion companies myself -which I regret -but I will today remove any links to them on all my past posts.

I can do better, and so can you!

Let´s buy quality items that last longer and don’t land in our landfills. Do not donate clothes to thrift stores such as Goodwill if they are not in excellent condition- otherwise they will land in our landfills too. Try to sell your clothes on ebay, poshmark or the like or donate them directly to people in need. Oh and don’t buy viscose. Nobody wants viscose!