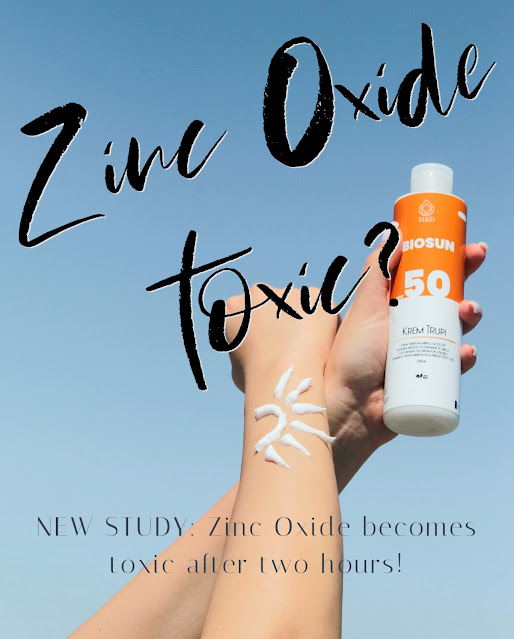 What a strange coincidence! I just wrote a couple of weeks ago this article, in which I declare my doubts that mineral sunscreen is better than chemical sunscreen (and on top of it I had recently a hot debate with an esthetician about this) and now a new study from the University in Oregon State declares that sunscreen that includes zinc oxide loses much of its effectiveness and even becomes toxic after two hours!
The toxicity analysis was tested on zebrafish, and you might think- zebrafish? We are not zebrafish- however, zebrafish share a remarkable similarity to humans at the molecular, genetic and cellular levels, meaning many zebrafish studies are immediately relevant to people!
Here is what Claudia Santillan (one of the scientists from the study- from the Department of Environmental and Molecular Toxicology) said,
“With either size of particle, zinc oxide degraded the organic mixture and caused a greater than 80% loss in organic filter protection against ultraviolet-A rays, which make up 95% of the UV radiation that reaches the Earth. Also, the zinc-oxide-induced photodegradation products caused significant increases in defects to the zebrafish we used to test toxicity. That suggests zinc oxide particles are leading to degradants whose introduction to aquatic ecosystems is environmentally hazardous.”
Not only is zinc oxide losing after 2 hours 80% of its effectiveness, but it also increased defects on the zebrafish! That is scary! 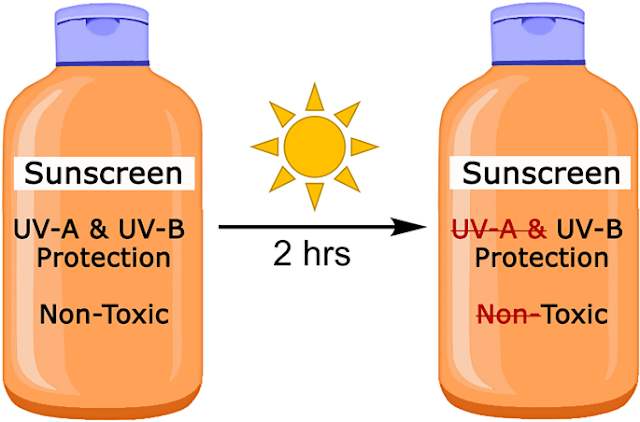 I had to laugh out loud when I read the following passage from the study- this is exactly what I was explaining in my article earlier!!!
“Sometimes small-molecule UV-filters have been described as “chemical filters”, associated with a perspective that these compounds function by UV-light absorption, while the term “physical filter” has sometimes been used to describe mineral nano and microparticles, associated with a protection mechanism against UV light via scattering. This is inaccurate because inorganic mineral filters have also been demonstrated to have absorption as an important mechanism of protection. Also, the term “chemical filters” might imply that mineral filters are not chemicals, which is of course inaccurate.”
Mineral sunscreen is a chemical sunscreen- I was right all along with my suspicion! The term “mineral sunscreen” is only a smart way of wording – a marketing strategy because mineral sunscreen sounds better than chemical sunscreen. Who wants to apply chemicals on their skin after all! We are all lied to!
The study concludes also positive news: all five of the commercially relevant small-molecule UV-filter mixtures (meaning: chemical sunscreens!!!) were mostly photostable! YES!!! 🎉
However, the bad news is that both the nanoparticulate and the microparticulate zinc oxide degraded the organic mixture and caused > 80% loss in organic filter UV-A protection. In addition, the zinc oxide -induced photodegradation products caused significant increases in zebrafish morphological defects. These results suggest that zinc oxide particles may increase sunscreen toxicity in ways not currently recognized. Both nanosized zinc oxide particles and non-nano zinc oxide particles caused toxicity upon UV irradiation.
Furthermore, the study concludes: “It is inappropriate to mislead the public about safety through marketing tactics focused on particle size.”
I also want to mention that I have seen a couple YouTubers talk about this study and to my surprise (the ones I watched) they did not take the study serious and basically said: “It was just zebrafish- keep using your zinc oxide until further studies are available.” One YouTuber was claiming that she would not mix her zinc oxide in the way the study did and that is why this study would not apply to her. What nonsense! I find their reaction highly questionable. But to each their own.
However, I do not agree. Better safe than sorry. Probably best to skip zinc oxide as for now. Why even risk it? Also: let´s not forget the other point: even if zinc oxide would not become toxic, the study still concludes that it is after 2 hours 80% less effective as UV-A protection!!!
Or take it from Dr. Aurora Ginzburg (she led the study): "I would say based on this work, I would avoid zinc oxide."
What do you think?
I highly recommend reading the new study yourself and build your own opinion.