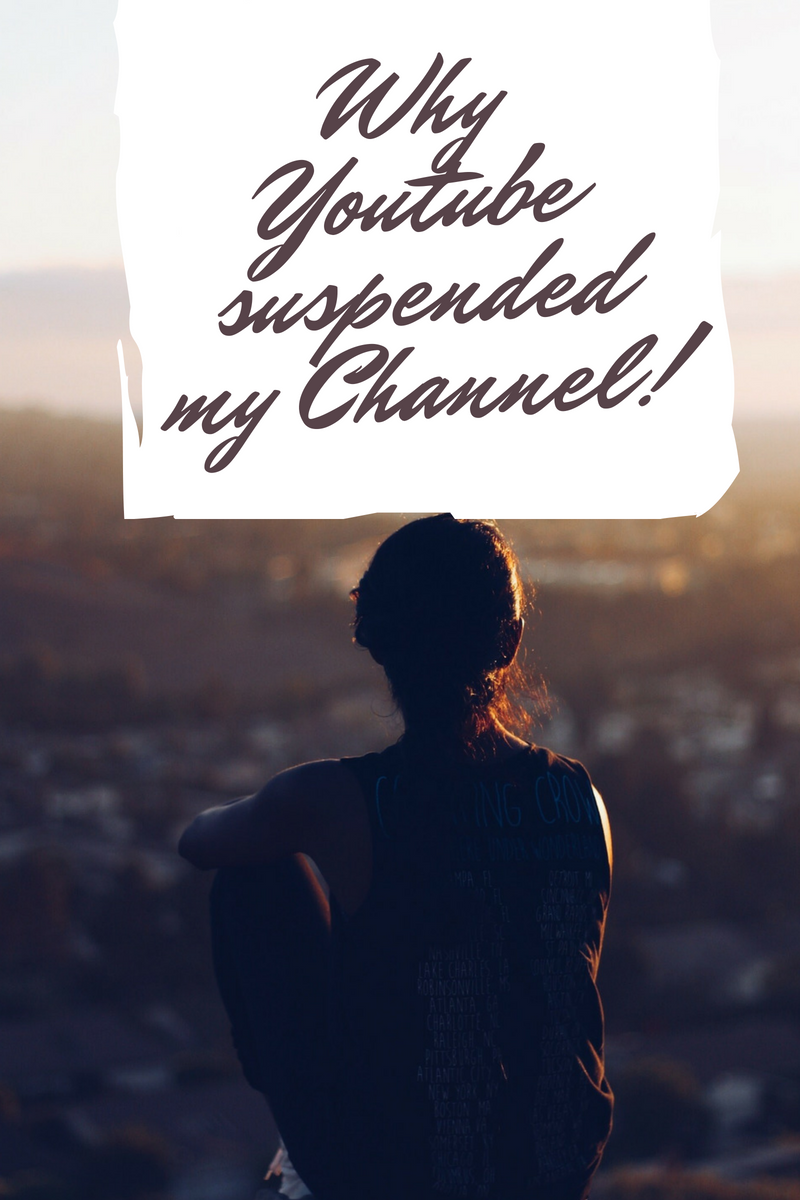 This morning I woke up to an email from YouTube stating "that due to repeated or severe violations of our Community Guidelines your YouTube account Sissi Over40 has been suspended."

Furthermore I am "prohibited from accessing, possessing or creating any other YouTube accounts." which means that my other German channel got suspended as well, as well as another channel that I used to store private family videos, including baby videos from my son that I can´t access anymore and even my husbands car channel... I can not even log in any of my accounts!


You will be wondering and curious why this happened, so let me try to explain.

Around January 2018 someone flagged one of my videos (that I uploaded in summer 2017) as "inappropriate". It was the video: "How to get Retin-A without a prescription". YouTube removed the video from its platform and I received a "strike" for the video.

What bothered me was, that I can find- to this day- countless other videos on YouTube that include the same information, that I gave in my video. YouTube is full of this content. All I hear from YouTubers over 40 is: Retin-A, Retin-A, Retin-A! So I felt, that it wasn´t very fair that my video got removed, while all the other videos are still out there.

Type in the YouTube search bar "How to get Retin-A" and you will be presented by an endless list of videos. Here are only the first 3 that I found. So, why do I get flagged, a strike and even suspended, while these ladies here all happily share the same information?

Well, I decided to edit my video, changed the title from "How to get Retin-A without a prescription" to "4 ways to get Retin-A cheap" and also added a long disclaimer, that everybody has to do their own research and that everybody is doing this at their own risk and also that I am not a health care professional or doctor. Geez- all I am talking about in my video you can find also in this article and nothing of it is as crazy as it sounds. The craziest part that I am saying in the video is probably to suggest to buy Retin-A from an online pharmacy in India.

I re-uploaded that video with all the mentioned changes and now you probably think: OK, this is the reason my channel got suspended. But no! I can see that the video this time in question was the video: "Retin-A Skin Care Routine"- also an older video from last summer and again it was about Retin-A. Someone flagged it and then YouTube decided it is again "inappropriate". What? You can find hundreds of similar videos on YouTube! Why is it a problem to show my skin care routine- even if it includes Retin-A? It´s not that I am mentioning the online pharmacy from India in that video!

So, just like that, this was my second strike and then YouTube simply suspended ALL my channels (this happens apparently automatically after 2 strikes).

YouTube´s official reason for the suspension is:

"YouTube doesn't allow content that encourages or promotes violent or dangerous acts that have an inherent risk of serious physical harm or death. For example, it's not okay to post videos showing drug abuse, underage drinking and smoking, or bomb making."

Are you kidding me? I feel like a terrorist! I am not in no way promoting violent or dangerous acts that cause physical harm or death or showing drug abuse, underage drinking and smoking or bomb making! This is ridiculous.

Even if someone doesn´t like my tips on how to get Retin-A- it isn´t against the YouTube community guidelines! I carefully read through them and can´t find anything that I am violating! 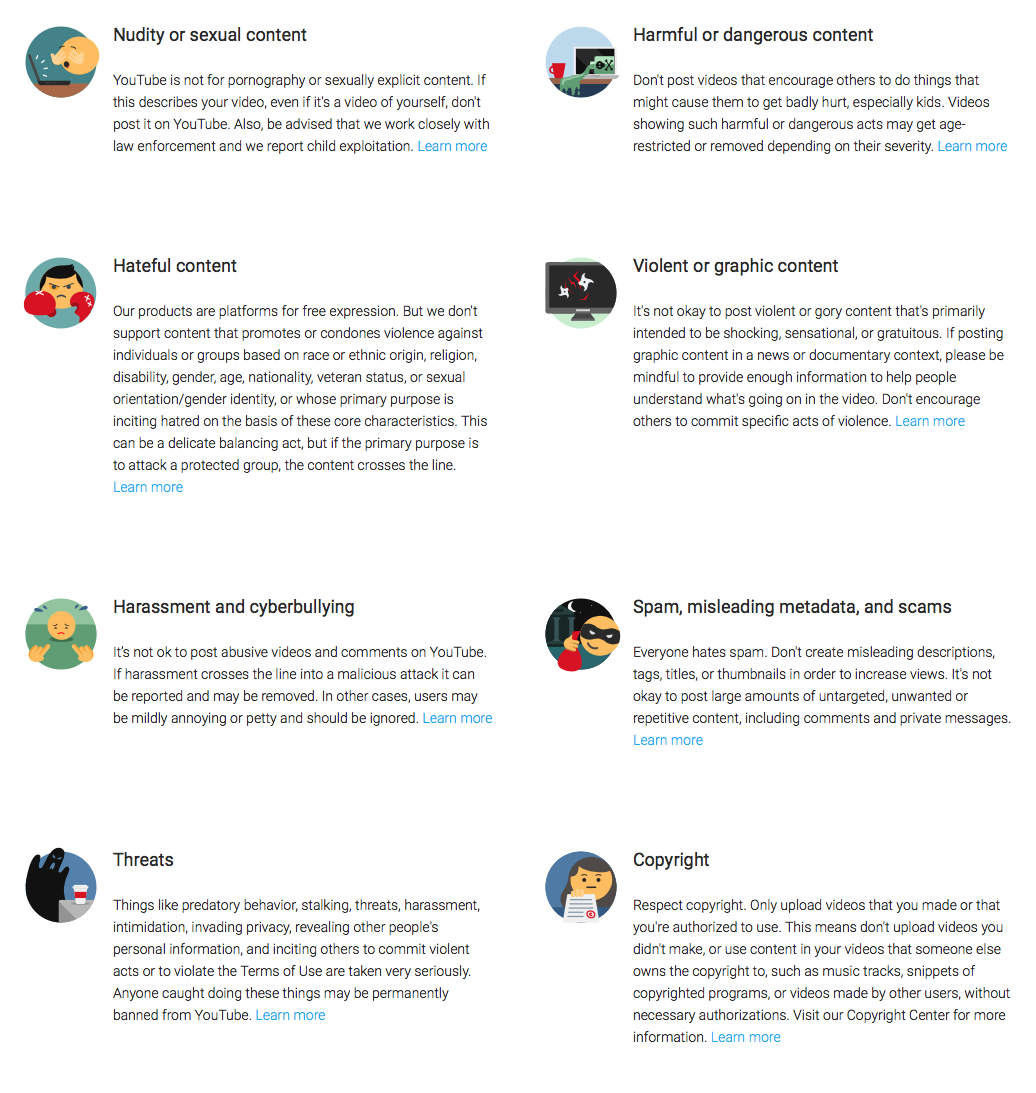 What I find the most suprising is -however -that one person has the power to completely suspend my Youtube channel. And I am guessing it is simply a hater. I have this person that always thumbs down all my videos within 5 minutes of uploading. The other guess is that this is coming from another channel with similar content- a competitor, if you will call it that. Geez. It has gotten so competitive on YouTube and so full of hate (I already mentioned this earlier in this article "Why you will never be successful on Youtube").

Anyway, I haven´t really actively uploaded on my beauty channel since December, because I wasn´t really in the mood - however I absolutely was in the mood with my newer German channel. It started to get really fun over there and now BAM! All channel activity from ALL MY CHANNELS suspended.

And it also bothers me very much, that even my old private channel is suspended that I only used to store family videos (they were set on private). How stupid of me to store them on YouTube, but it just really never came to my mind that something like this would happen.

Anyhow, while I will try to appeal this decision, I have my biggest doubts that anything will be done. From my experience with YouTube, I will only receive an automated response.

UPDATE: my appeal was denied and they were again referring to the YouTube community guidelines...

So, that was it with YouTube, I guess. 4 years, hundreds of videos- all gone due to 1 (or possibly more?) haters. Thanks a lot. I hope you are happy now? (this is to the hater!)

NEW!!! On Monday morning I was informed that my YouTube channel will be reinstated. No information on what happened- nothing. I was only advised to not talk about Retin-A anymore. I put my 3 videos that I made about Retin-A all on "private" (so they are not visible to the public). I am so relieved! I have no clue if this was simply a mistake that they suspended me or what. Because from what I found out you need 3 strikes before you get suspended and I had only 1 strike...

What is clear though is, that someone is flagging my videos for "drug abuse". Please! Calling Retin-A "drug abuse" is going a little far. Anyway, I am so happy that YouTube did not let that hater win. I had 4 stressful days because of this and I am glad this is over. Downloading all the baby videos from my son now!!!

Last words: I find it somewhat unfair that everybody else (in the mature YouTube community) is allowed to talk about Retin-A but me- but anyway. At least I got my channel(s) back. ;-) 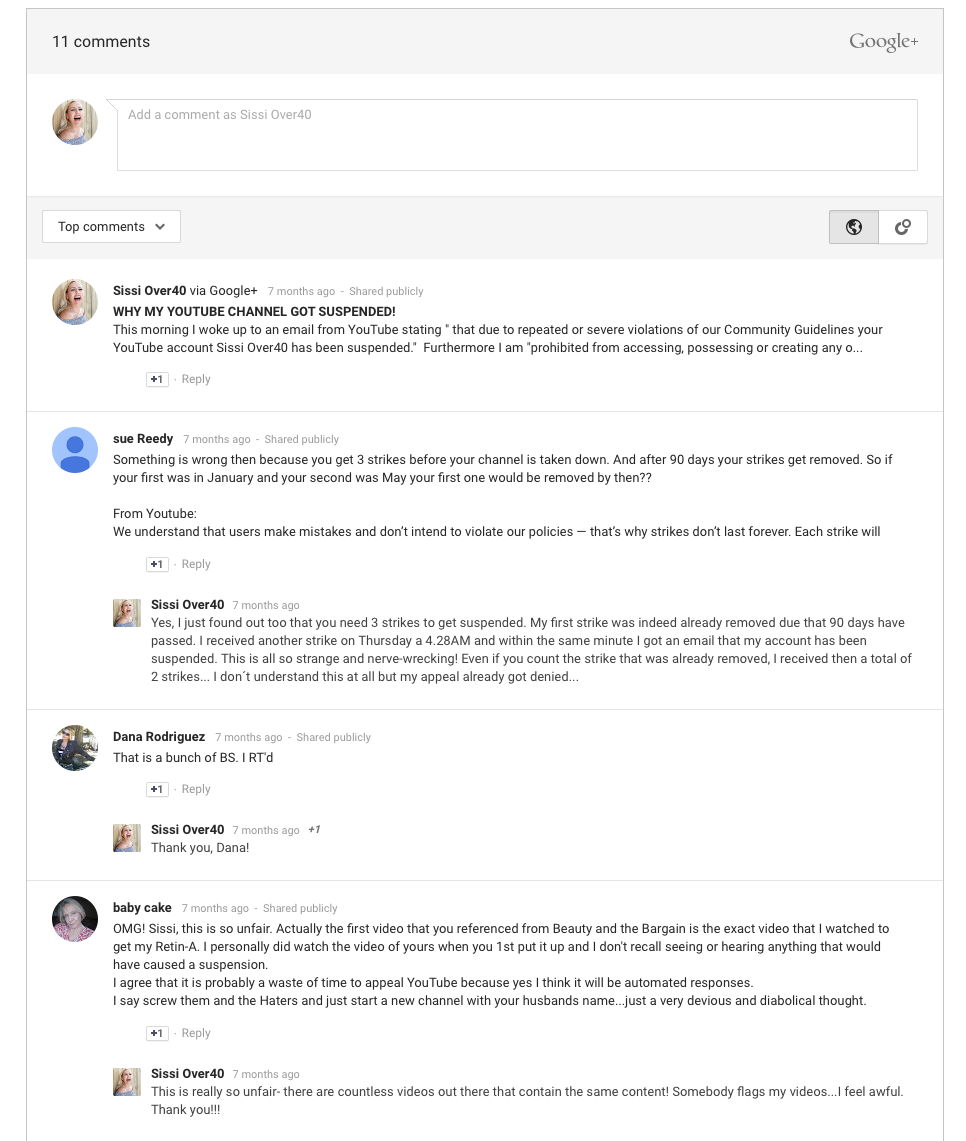